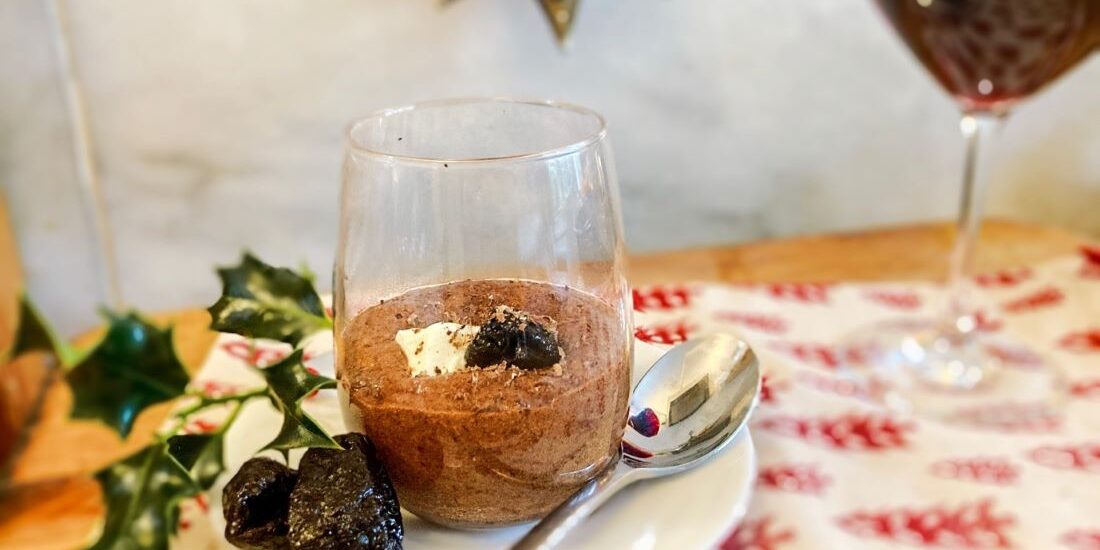 This is a lovely make-ahead dinner party dessert which feels very indulgent but is actually rather nutritious. It is high in protein and fibre and low in sugar. The orange and cinnamon give it a really festive flavour.

1. Break the chocolate into a bowl and set the bowl on top of a saucepan with some simmering water in it. Don’t let the water touch the bowl. This will mean the chocolate melts gently. Stir in half of the orange extract to the melting chocolate.

2. Meanwhile, in a small saucepan simmer the California Prunes and 200ml water for about 10mins. Add ½ a teaspoon of the cinnamon, transfer to a mini blender and whizz until you have a smooth puree.

3. In a large bowl, whisk the egg whites until soft peaks form and then add the sugar. Continue to whisk until stiff.

4. Mix the melted chocolate and the California Prune puree together and then beat in a couple of spoonfuls of the egg mixture. Once well combined, gently add the chocolate mixture to the egg whites and fold together. Work slowly and gently, keeping as much air in the eggs as possible. It might take some time to incorporate fully, but don’t rush this step! You will be rewarded with a light and foamy mousse texture.

5. Once mixed, divide the mousse between six glasses or bowls and put in the fridge to set for a couple of hours.

6. At this point you can make your orange and cinnamon crème fraiche topping. Mix in the remaining cinnamon and orange extract. Once the mousse has set you can add a spoonful to each one and garnish with half a California Prune and some grated chocolate or orange zest.

Registered dietitian and professional nutritionist, author of the book The Bone-Strength Plan, Jo Travers is also known as “The London Nutritionist”. She has come onboard the California Prune Board as an ambassador to help us spread the word of the health and nutritional benefits of prunes.