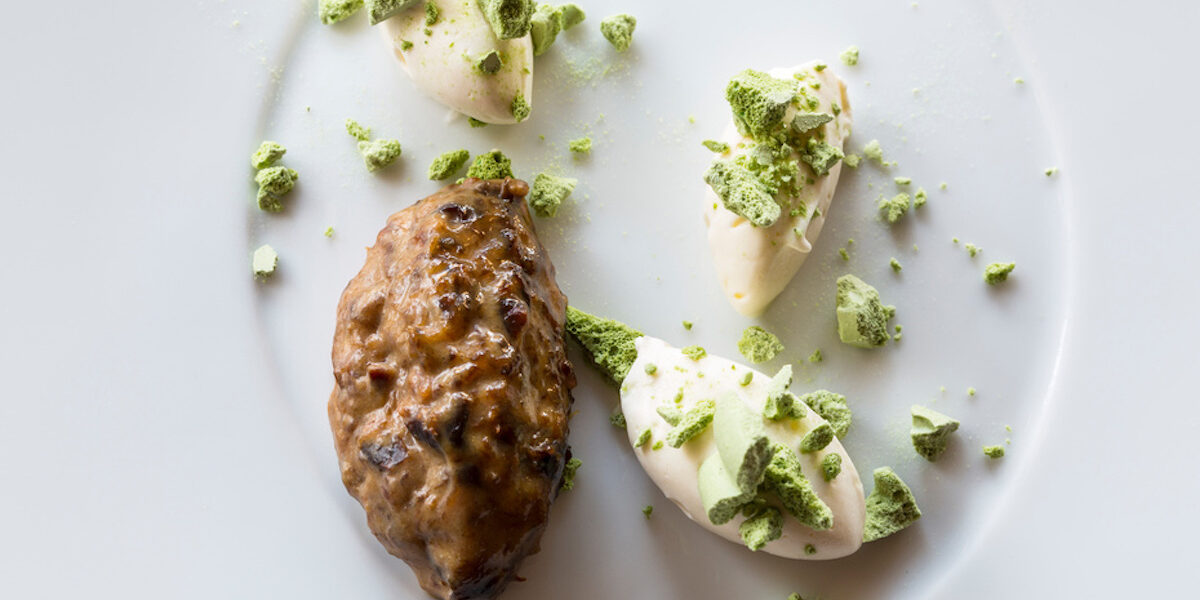 From Great British Chefs – Pascal Aussignac
Pascal Aussignac deconstructs a classic Pavlova, and gives it a French twist, to create this beautiful California Prune dessert. Keeping the traditional combination of crunchy meringue, soft fruit and luxurious whipped cream, Pascal adds vibrancy and colour with a fragrant green tea meringue, and richness and depth from his tipsy ganache – a decadent mix of Armagnac-infused California Prunes and white chocolate. The three elements of this dessert can all be made ahead, making it perfect for a dinner party dessert.

Pascal Aussignac's name is synonymous with "la cuisine de Gascogne". With a Michelin star and a host of French restaurants in his stable, Aussignac's understanding - and reworking - of Gascony's fare is unsurpassed. By the age of 25, after training with Gerard Vie, a respected chef at Les Trois Marches and French masters Alain Dutournier and Guy Savoy, Aussignac knew he wanted to open his own restaurant. Undeterred by cautious French banks unwilling to back a talented but young chef, Aussignac brought the no-nonsense Gascon cuisine of southwest France to London where he found a willing audience. It is in the British capital that Aussignac has thrived. In 1998, he opened Club Gascon where.the focus was - and remains - on informal, traditional, regional food dedicated to the Gascon region. Whilst the Gallic chef remains faithful to those modest origins, his food has evolved into more refined fare. Rustic yet innovative, Aussignac is curious in his experimentation and the likes of wasabi Chantilly sits comfortably on the menu alongside cassoulet. The restaurant was duly awarded a Michelin star in 2002. Aussignac is co-owner of the Gascon Connection group, which boasts an impressive roster, consisting of flagship restaurant Club Gascon and Cellar Gascon wine bar - both in Smithfield; Comptoir Gascon, a romantic, gourmet bistro in Charterhouse Street; Cigalon and Baranis - a Provençal restaurant and bar respectively, on Chancery Lane; and Chip + Fish in Westfield, London, Stratford City and Trinity, Leeds. As well as a Michelin star, which has been maintained for over a decade, in 2013 Aussignac was named "Restaurant Chef of the Year" at the Craft Guild of Chefs Awards. His inventive approach to southwestern French cuisine has also won him the top accolade at the Taste of London festival no less than three times, where foie gras and truffle burgers, and Marmite Royale with soldiers, impressed judges with their ingenuity.
Go to Top